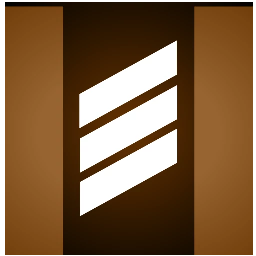 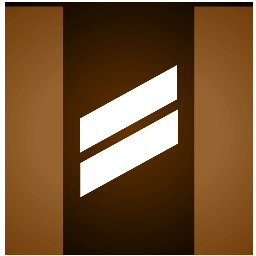 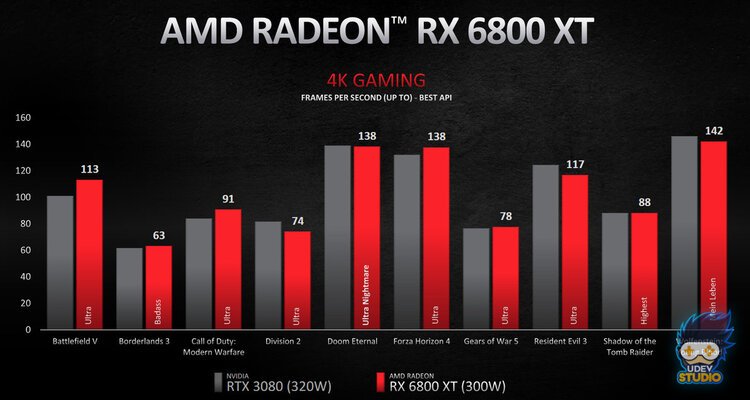 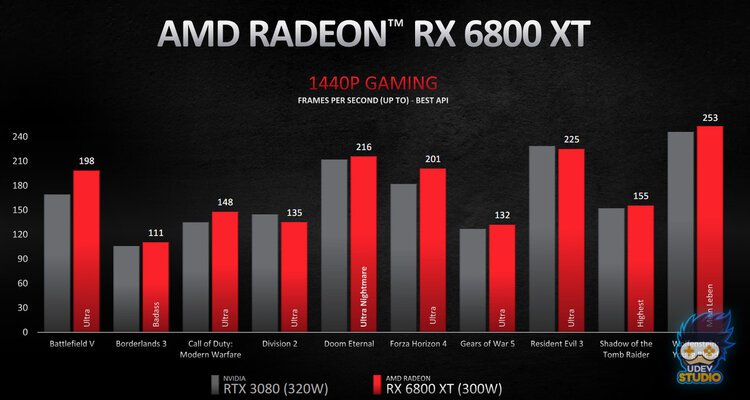 AMD’s Radeon RX 6800 XT benchmarks at 1440p.
AMD has shared some early benchmarks that show the Radeon RX 6800 XT beating the RTX 3080 at 4K in Battlefield V, Borderlands 3, Call of Duty: Modern Warfare, Forza Horizon 4, and more. It also matches the RTX 3080 in Shadow of the Tomb Raider, Gears 5, and Doom Eternal. If these results are similar across a wider range of games, then the Radeon RX 6800 XT certainly looks promising for solid 4K gaming performance.
AMD’s own benchmarks are also similar at 1440p, with the same games tested. We’ll obviously need to test this card fully against the RTX 3080, but it looks like AMD has managed to match or beat Nvidia’s latest GPU in a number of games. AMD has achieved these performance improvements while keeping the power draw less than Nvidia’s RTX 3080. The RX 6800 XT draws up to 300 watts of power, while the RTX 3080 draws up to 320 watts. 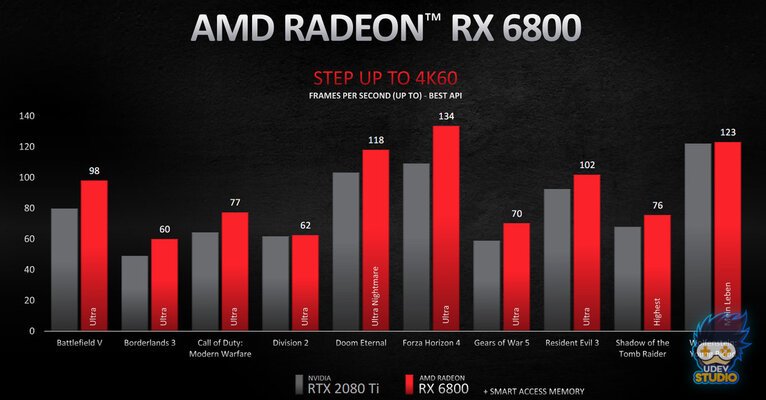 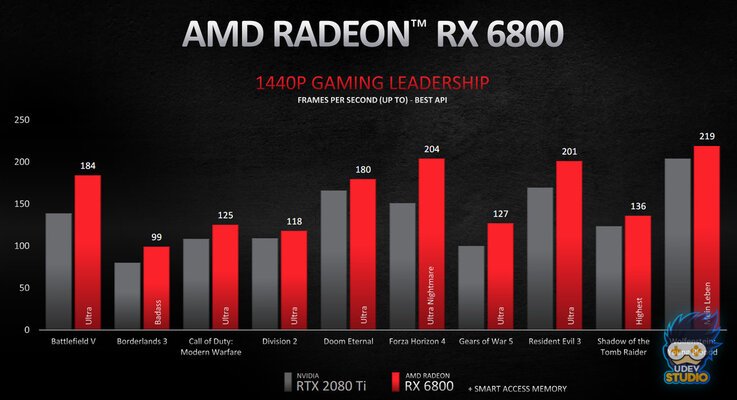 Finally, there’s the $999 RX 6900 XT, which goes head to head with Nvidia’s RTX 3090. While Nvidia has positioned the RTX 3090 for 8K gaming, its large 24GB of memory makes it more likely to be used by the creative industry as a Titan replacement. AMD hasn’t opted to bump the memory on its equivalent, keeping the RX 6900 XT at 16GB of GDDR6 memory and offering a competitive price as a result.
AMD has bumped up its compute units to 80 in total here, but the core clock remains at 2015Mhz with a boost of 2250Mhz. This all results in 23.04 teraflops of GPU performance. The performance against the RTX 3090 looks a lot more mixed from AMD’s own benchmarks. While the RX 6900 XT promises to comfortably beat the RTX 3090 in Battlefield V, Forza Horizon 4, and Gears 5, it loses out or just matches in other titles. 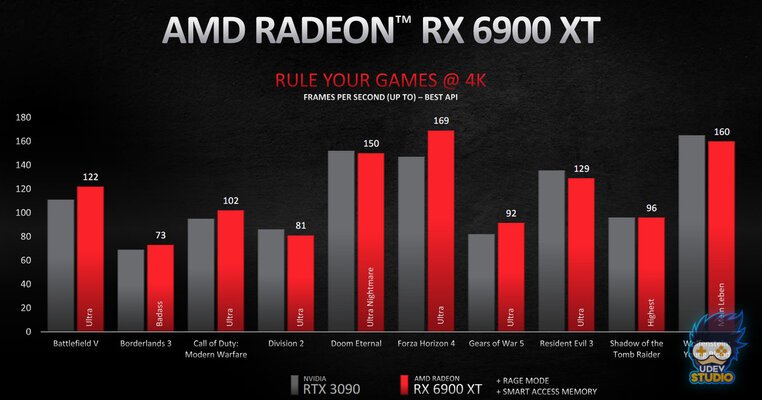 AMD’s Radeon RX 6900 XT benchmarks at 4K.
All three new Radeon RX 6000 Series cards also use a traditional 2.5 slot design, with regular PCIe connections and a triple-fan system that cools the cards. AMD hasn’t done any fancy work to shrink its PCB like Nvidia has, nor is it introducing a new 12-pin power connector.
You’ll notice that AMD has opted for 16GB of GDDR6 memory in all three of its new Radeon cards. That’s more than what’s available on the RTX 3070 (8GB) and RTX 3080 (10GB) but less than the 24GB found on the RTX 3090. Both Nvidia’s RTX 3080 and 3090 cards also use faster GDDR6X modules, but AMD opted to avoid the move to more expensive and more power-hungry high-speed modules.
Instead, the company is aiming for efficiency improvements with a new Infinity Cache design. Infinity Cache is the biggest part of AMD’s memory improvements here. Gaming at 4K can often be limited by memory bandwidth in modern GPUs, and AMD is hoping to answer some of these demands with a bigger, more capable cache instead of higher-speed GDDR6X.
AMD is using a high-speed 128MB cache that’s based on the company’s Zen 3 L3 CPU cache design. It’s optimized for graphics use and promises to deliver twice the bandwidth. What this all means is that these latest Radeon cards can more efficiently feed data to the graphics pipeline and provide performance improvements without significant increases to power draw. AMD’s goal here was to double the performance from its previous RX 5700 XT card with only a slight bump to power draw. 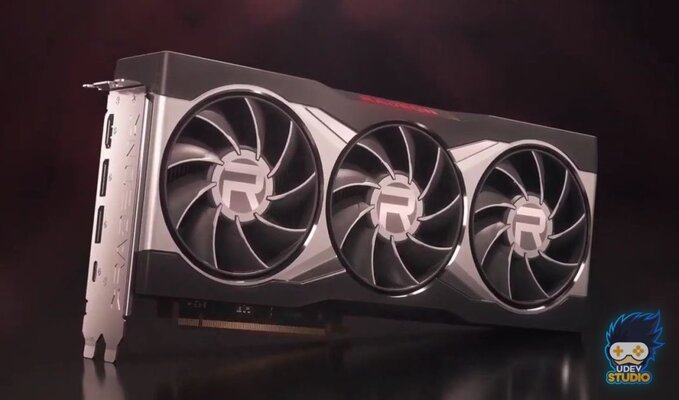 AMD’s RX 6800 XT graphics card.
Because these cards are all RDNA 2, that means they support Microsoft’s DirectX12 Ultimate APIs and even DirectStorage once it’s available. This includes hardware-accelerated ray tracing and variable rate shading. Once DirectStorage is fully enabled in Windows at some point in 2021, load times on certain NVMe drives will be reduced further. AMD also has a “rage mode” for easy and stable overclocking on these cards. It will be interesting to see how much extra performance can be squeezed out of these supposedly efficient cards.
While AMD is promising to go head to head with Nvidia in 4K gaming and more, the one big missing piece of this battle is a lack of an equivalent to Nvidia’s DLSS. Nvidia’s AI-powered super sampling technology has been transformative for the games that support it, bringing great image quality and higher frame rates by simply toggling a game setting.
AMD tells me it has a new super sampling feature in testing, which is designed to increase performance during ray tracing. The company is promising its super sampling technology will be open and cross-platform, which means it could come to next-gen consoles like the Xbox Series X and PS5. AMD is working with a number of partners on this technology, and it’s expecting strong industry support. Unfortunately, this won’t be ready for the launch of these three new Radeon RX 6000 Series cards.
Both the Radeon RX 6800 XT and RX 6800 will go on sale on November 18th, with the Radeon RX 6900 XT hitting stores on December 8th. While AMD hasn’t been able to match or beat Nvidia’s pricing for the RTX 3070, the $50 saving on the RX 6800 XT vs. the RTX 3080 could be significant. It will all depend on whether AMD’s performance promises measure up to Nvidia’s latest cards, as they could offer a great alternative for people looking to upgrade their GPUs in the coming months. Hopefully AMD will be able to supply enough stock for the inevitable demand.